FROM LA TO NOTTINGHAM – WE PROUDLY PRESENT: BIONIC & KID BOOGIE

WORKSHOP SUITABLE FOR AGE 6 AND ABOVE

Is a member of world famous crews such as Machine Gone Funk, Animated Villains and the Mop Top Crew. Kid Boogie has always been a fan of Popping, but In the year 1999, after trying to imitate waves and glides that he had seen at a party and after finally meeting The Electric Boogaloos, he was able to finally find out what it really meant to do the style called Popping.
His drive and dedication led him to compete and teach around the world. Entering many of the famous competitions and also win some along the way. Kid Boogie is still very active to this day in judging, competing, teaching workshops and performing. He has most recently won Pop Lock Box World Championship Final in Japan & O.B.S World Championship Final in Taiwan & R16 World Finals In Korea. He will continue to dance and pursue his passion for teaching the dance he loves.

After winning the World Championships, Battle of the Year 1998 in Germany – along with his former B-boy crew, Rock force. (His group was the last USA group to ever win Battle of the Year.) Bionic gained international acclaim and is now recognised as one of the world’s fiercest competitors in popping. This has allowed him to compete, teach, judge, and perform all over The World.B ionic also co-founded & works with California based popping crew Machine-Gone-Funk.

Bionic has competed & earned victories in huge arena held events like R16 Korea, UK B-boy Champs, China’s Keep On Dancing, US World Hip-Hop Championships, and Funkzilla Taiwan. Bionic has worked on Commercials for Sony PlayStation and even Capital One. He’s also performed for Taylor Swift on the AMA’s, the TV show: The Voice, America’s Best Dance Crew Season 2, & Legion of Extraordinary Dancers. Bionic also was currently attached as the Mime & Dancer on Cirque Du Soleil: Michael Jackson’s “The Immortal World Tour”. Most recently, he was working with Chris Scott (LXD, Step Up Movies) co-choreographing for the European Baku Olympics and even So You Think You Can Dance: Stage vs. Street. Also recently toured Japan with Min-On Productions for a Theatre show called “The Battle”. Which highlights a cultural exchange between dancers from Japan and the USA. 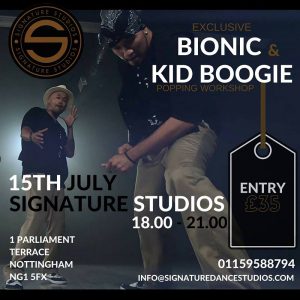